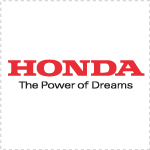 The City-Brake Active System operates when the vehicle is travelling at speeds of less than 30km/h*. It uses a laser radar installed in the upper part of the windscreen to detect when a collision is imminent. If the City-Brake Active System identifies** a high risk of collision it will issue audio and visual warnings to the driver. If the driver does not take action to avoid the collision then the system will automatically apply the brakes.

The City-Brake Active System also protects drivers from accidental acceleration at speeds of less than 10km/h* or from standstill. If the system determines that the driver has pressed too hard on the accelerator pedal, for example by mistakenly stepping on the accelerator pedal instead of the brake pedal, when there is another vehicle within 4m* of the front of the vehicle, the driver will receive audio and visual warnings and the City-Brake Active System will control engine output to restrict the vehicle from moving forward.

Honda will first introduce the City-Brake Active System on the all-new Honda Fit which will go on sale in Japan later this year.

Honda’s commitment to safety is embodied by the term ‘Safety for Everyone’ and Honda will continue to equip cars and motorcycles with the most advanced,
effective safety features possible. Honda’s goal is nothing less than the safety of all
those who share the road in today’s mobile society.

* Approximately
**Depending on driving and/or weather conditions, the radar may not be able to recognise vehicles properly.